From swape light to GPS

For seafarers it has always been important to be able to navigate to get to the harbor safely. Before modern navigation aids were available, this was challenging for both fishermen and mercantile shipping. The available tools were compass and clock, but above all landmarks of different kinds. In addition to using natural landmarks, such as churches or larger trees, many lighthouses and permanent landmarks were erected. These landmarks are of no practical significance today since nowadays radar and above all GPS is used for navigation.

The cairns was mostly used by merchant shipping for daylight navigation. The fishing in the 19th century and in the beginning of the 20th century took place mostly at night in autumn and spring, you were then dependent on some kind of light on land to navigate.

At the fishing village Tomtbod there is a reconstructed swape where the light came from a fire basket, in 1875 the tilting swapes were replaced by light poles.

At the fishing villages Hus and Tomtbod north of Ronehamn, there are light poles where kerosene lamps were hoisted up.

Along the Rone coast there are 5 pieces of cairns built in the 19th century as navigational aid.

Grötlingboholm cairn
Built in 1847, 4.2 meters high with a 3 meter high painting. It showed the beginning of the southern fairway into Ronehamn when it was even with Rone Church.

Getorskär cairn
Built in 1858, 3.6 meters high with a white round painting. Its actual task is unclear and varies in different editions of Swedish pilot descriptions.

Langård cairn
Built in 1858, 4.2 meters high. The function seems to have been to form a line even with Grötlingbo church which was not to be passed west when entering from the north towards Ronehamn.

Tomtbod cairn
Built in 1867, 4 meters high with a square whiteboard. When Tomtbod cairn was even with Rone church and Öja church even with the mill on Grötlingbo cape, it indicated the position for the first mooring point in the northern fairway.

Austergrund cairn
Built in 1872 and rebuilt in 1915 to today's appearance. Total height is 8.8 meters. Its main task was to warn of the shallow waters off Ronehamn where many ships sank.

Ronehamn lighthouse
When the lighthouse was built in 1955, it largely took over the tasks that the cairns previously had for the entrance via the northern inlet to Ronehamn. Nowadays, only this is used because the south does not have enough depth for today's vessels.

The positions of the cairns 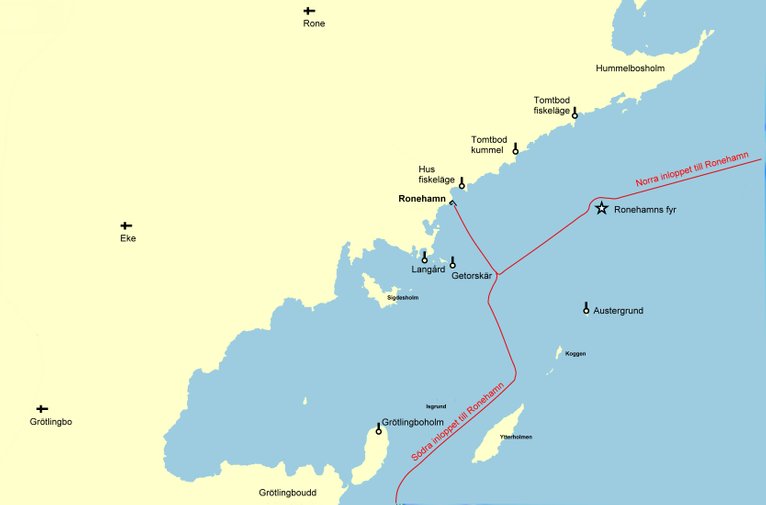